During my final year of undergraduate study, my friend criticized me badly for accepting my current job. “That’s very low pay. Are you that desperate to get a job?”

As an auditor in one of the Big 4 firms, my starting pay is lower than the pay from banks or rising tech companies or some local start ups. Payslip is important in our lives but not as much as working for the right job.

In the early stage of my job hunt, I didn’t really know what I wanted to be. I would list down the things I could do, and strike through the things I didn’t want to do as a career. My biggest worry was to work in a career that I might hate to continue after 10 years. As I went through a lot of career talks, networking sessions and a few interviews, I started to learn what I wanted to do. Sometimes, I became interested in the (career) story of the interviewer through their brief introduction and we would talk about it happily. I took these as a good opportunity to learn what I am passionate about. I really enjoyed these moments.

So, I chose this job without hesitation when I received the offer. (This is one of the job interviews when I talked with the interviewer about her passion for the job.) FYI: I am not an accounting graduate and I work as an IT auditor, not a financial auditor. So this is not a cliche choice.

It is almost a year that I started working and I learnt a lot of things in the past 11.5 months. I enjoyed the challenges and found areas to grow. Of course, I am stressed sometimes but I think life would be boring not to have stress sometimes. I would be staying late just like other auditors and enjoyed my working life with my new friends (coz they are more than just colleagues) in office.

So, I guess I am in the right job so far.

On a side note, my friend tried to pursue a lot of high paying jobs and ended up as a desperate unemployed until now. Hope she enjoys the photos of my one year anniversary in working life.

Kout Hnyin Kyee Tout is a Myanmar traditional food made of sticky rice. The sticky rice or glutinous rice is put inside the hollow bamboo and baked. So you can enjoy the smell of bamboo when u eat sticky rice. The thin white layer inside bamboo becomes a wrap when the hard bamboo is split or uncovered. 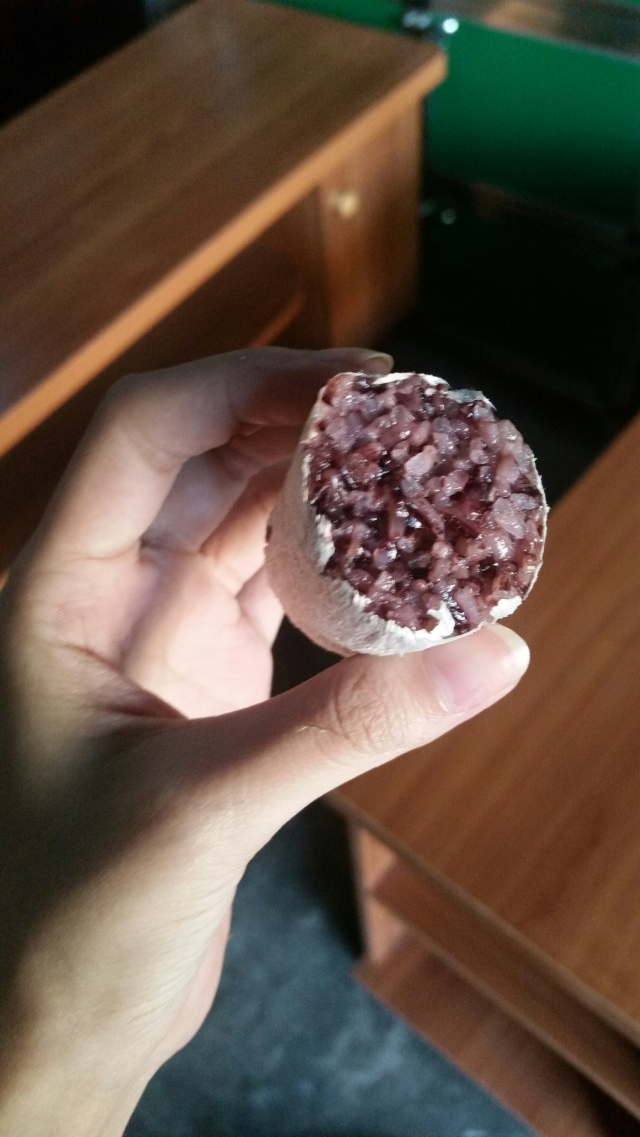 I am introducing you all with a Myanmar traditional food called Yay-mont. I would say Yay-mont is Myanmar version of Crepe. Actually, there are a variety of Myanmar snacks similar to this. Yay means water and Mont means snack. So, this is water snack! LOL Just kidding!

Yay-mont is made of rice flour like many other Myanmar traditional snacks. Most of the Myanmar traditional snacks are made of regular rice flour or glutinous rice flour. There are thick and thin versions of yay-mont. Thick yay mont is soft, and beans (usually small red beans) on top. Sometimes a bit sunk in the rice flour. Thin Yay mont actually looks more like crepe. More oil are added if crispy version is preferable. Boiled yellow beans are added mostly but you can find some with small red beans also. For both version, specially made sprinkles are added when serving. The special sprinkle is a mixture of grounded peanut, sesame and salt. The stall owners will serve hot with sprinkles and a bit of oil pats.

Yay Mont used to be a popular breakfast and afternoon snack in the earlier days but it is now disappearing especially from urban area. You can only find these small yay mont stalls in some rural areas in early morning or afternoon.

Anyway, this is one of my favourite Myanmar Snack and I would suggest you all to try it if you happened to find one during your visit in Myanmar.

This is thick version of yay mont, that I prefer.

I am introducing you all a unique way of eating pickled tea leaf salad. This is a very rare way of eating even in Myanmar but this is definitely a healthy choice. Myanmar people usually eats tea leaf salad with diced or sliced tomato. This is pretty simple and here’s how I did.
You need seasoned pickled tea leaves, peas and nuts and tomatoes.
Firstly, cut the tomato into half, and remove the seeds.
After that, add seasoned tea leaves followed by the peas and nuts.
You may add chilli and garlic if you prefer.

Mont Lone Yay Paw is a Myanmar snack similar to rice ball, which you may all have eaten or seen before.

It is usually eaten in Myanmar Water Festival, a celebration for Myanmar New Year. It is not a compulsory food but it seems to be a must to eat this snack. Friends and families meet up to make Mont Lone Yay Paw together and usually share it with neighbours, and people passing by while they are celebrating water festival. Coming Monday is the first day of water festival and so this is time for Mont Lone Yay Paw.

The name Mont Lone Yay Paw actually gives idea of how it is done. Mont Lone means snack ball, so it looks like small ball and Yay Paw means floating on water. It is actually boiled in a pot and Mont Lones will come up to the water surface when it is done. Sounds interesting right? OK, I have attached a video to show you how to do it if you are interested to try making Mont Lone Yay Paw.

Hope you all enjoy the video and making it yourself. Happy Water Festival and Myanmar New Year everyone!

I am new to knitting and this is my first knitting project. Yes, a slouchy beanie. This is easy, and simple for all the beginners out there, like me. It took me one and half day to finish this. pretty beanie.

I used a 5.5 circular knitting needle. If you are in Singapore, you can buy the needle from Spotlight at Plaza Singapura and yarn at Daiso which is just next to Spotlight. You can also buy the yarns from Spotlight but buying cheap yarns from daiso for your practice round will save your cost of learning. 😀

Get this pattern from Studio Knit.
Watch the tutorial here.

Hope you all enjoy this!

Green mango may be a bit sour but it is crunchy and taste great. It is the stage before ripening but there are some species of mangoes that are very good to eat before ripening. Myanmar people eats it as dessert or with rice.